Acute pancreatitis is a life threatening state due to sudden inflammation and necrosis of the pancreas. The state leads to elevated amylase and lipase activity in the blood serum and determination of enzyme activity in blood serum is often used for initial diagnosis. Lipase level analysis is the recommended method since levels are not affected by some other non-pancreatic conditions that may increase amylase levels. However, amylase determination is a widely accepted and frequently used for In-Vitro Diagnosis. 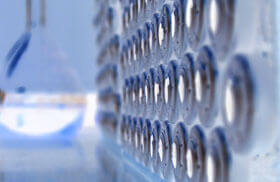 The Phadebas® Amylase Test was originally developed as an In-Vitro Diagnostis test for acute pancreatitis. Although the test is still in use for this purpose, most clinical labs have automated analyzers where Phadebas isn’t applicable. These labs use Phadebas for confirmatory testing from time to time. Phadebas is however no longer registered as an IVD reagent, even if the tablets remain the same.

Many clinical labs use a semi-quantitative electrophoresis assays to determine amylase activities and distinguish between the isoamylases. After electrophoretic separation of the various subclasses of salivary and pancreatic amylases, Phadebas tablets are dissolved on top of the gels. Where amylase is present, the blue dye is liberated and diffuses into the gel. Hence, the separated bands are coloured and reveal the Amylase pattern, which is used for assisting with the diagnosis. Phadebas does in these assays, not play an active role in the later diagnosis. The application is very common in for example Japan, and in some other countries. A complete application kit for the assay can be purchased through Analis, Belgium.