The enzyme α-amylase is found in very high levels in saliva. In the Phadebas Forensic Saliva Test products, α-amylase activity in stains is used as an indicator for the presence of saliva. Amylase is found in other body fluids, although normally at much lower levels than in saliva. Generally, amylase found in other body fluids will not be present in sufficient quantity for detection by the Phadebas method. As a reference on the differences in amylase activity between saliva and other fluids, the below list was compiled and published by P.H. Whitehead and Kipps (J. Forens. Sci. Soc. (1975), 15, 39-42):

Thus, a factor 1000 differs between saliva and urine, the second highest amylase containing body fluid. Traces of faeces can contain very high amylase activity and give rise to false positives. The source of such a stain is however quite obvious.

Phadebas has been used within Forensic Biology for many years. The original article that described the usefulness of Phadebas® in forensics was written already back in 1974*. It all started in UK but usage is now global. Originally the test was used for presumptive testing of suspicious stains, i.e. Tube test, but some labs started to crush Phadebas Amylase Testablets and spray them on filter paper. These papers were used as searching devices to localise hidden saliva stains on items, complementary to the Tube test that could only test visible stains. 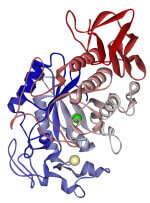 This method spread but such a technical procedure caused big variations between labs. To solve this issue, Magle in cooperation with some Forensic Biology labs started a project to develop industrially pre-manufactured Phadebas coated papers. In 2007, Phadebas Forensic Press Test was launched to ensure that all papers;

The principle behind the test is that Phadebas®, consisting of starch microspheres with a blue dye cross-linked to the starch, are immobilised on filter paper sheets. In the presence of amylase the starch is digested, releasing the water soluble dye, which diffuses through the pores of the filter paper. The resulting blue colour is visually observed on the non-reagent side of the Phadebas® paper. The Press test is performed when it is necessary to localise an amylase positive area on an item. If a very strong reaction is obtained with the Press test and there is no other obvious contaminating material, this is interpreted as an indication of saliva. The following link illustrates the methodology and simplicity with an Overview of Phadebas Forensic Press Test. For detailed instructions; please follow Phadebas Forensic Press Test Instructions. 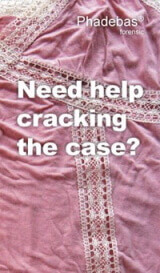 In-house testing at several independent forensic laboratories has determined that no other forensically relevant body fluid (sweat, semen and vaginal secretion) will react within 10 minutes using the current protocol, even after repeated deposition. The exception is faecal stains that may contain levels of amylase as high as those found in saliva. For this reason positive observations within areas obviously contaminated with faeces should not be interpreted for the presence of saliva. The presence of potential faecal material on an item should be recorded in the examination notes. In an independent trial performed in UK it was demonstrated that saliva from the most common pets did not give rise to any false positives.

To assure selectivity for saliva, the papers must not detect stains with an amylase activity below 2000 units/L within 40 minutes testing time. It has been demonstrated in several scientific articles that saliva dilute 1:100 can be easily be detected. For further info, please visit the Phadebas Archive.

The Phadebas Forensic Tube Test is more sensitive than the press test and used semi-quantitatively for the presumptive testing of saliva deposits. If it is suspected that the stain to be tested is a weak saliva stain, or if testing the supernatant from an extracted stain or swab, Phadebas tube test offers a better method than using Phadebas paper. A tube test may also be carried out if amylase is detected (using the Phadebas® Forensic Press test) in an area that exhibits other staining such as semen, blood or heavy vaginal deposits. The Tube test is used in two ways; qualitative and quantitative. The qualitative test relies in the observable colour difference between the positive test and a blank whereas the quantitative test makes use of absorbance spectrophotometry to exactly measure the α-amylase activity.

This site uses cookies for analytical purposes and to make your visit smooth and relevant. Read the details here.